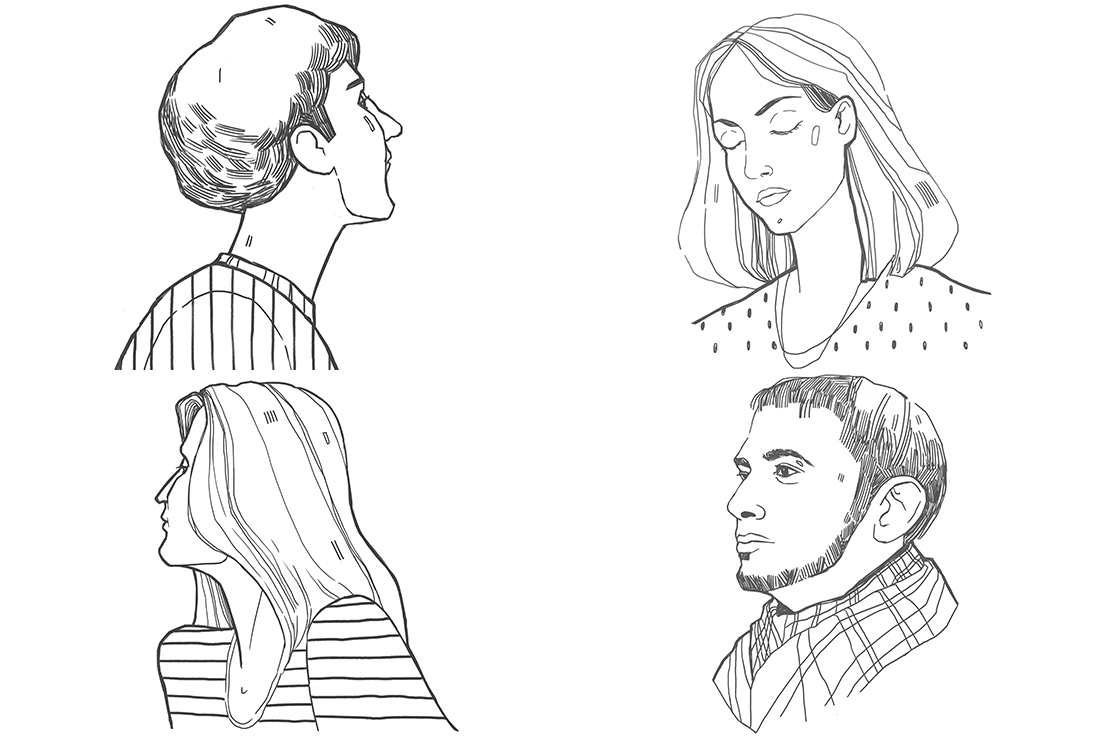 According to a 2021 study, people around the world spend almost 3.5 hours on average on social media daily. The recent Netflix documentary “Social Dilemma,” monopoly power hearings against Silicon Valley’s tech giants, such as Amazon, Google, Facebook and Apple, and an increasing number of data leaks every year raise concerns about the flip side of technology – data security, privacy, addiction and toxicity.

The Vivid Minds explored what drives people to deactivate their social media profiles and what it’s like to live ‘disconnected’.

I signed up for Facebook in 2003, when it was a startup available only for university students in the US. At first it helped me  keep up with what was going on in different classes and organize groups and clubs. I really liked Facebook in the beginning because I knew all the people in my friend list were from my university. So, you didn’t have to worry about your parents or family members seeing your posts.

When Facebook launched the news feed, it became an additional source of information. People began posting news articles and sharing comments about politics, while for me it still remained primarily a way to communicate with friends, post photos, keep up with where people from high school and college were and what they were doing.

I remember getting overwhelmed with content and finding the onslaught of advertising through the newsfeed so annoying. The second thing, which ultimately pushed me to close my account, was the way Facebook affected my mental health. Around the finals week my entire newswall would get full of my classmates’ posts on how stressed out they were about the exams. And these posts were enough for me to start feeling stressed immediately. So, I closed my account to stop it.

I quit using my personal Facebook account in 2012. And in 2018 I closed my professional account which I used for sharing my journalism works. I kept my professional Facebook page longer because I had fans there. Unfortunately, Facebook kept on changing their algorithm so that if you didn’t pay the platform to promote your posts, they would reach fewer people. At first, maybe 30 or 40% of my fans would see my posts, but then every year that number dropped. Before I quit, my posts would reach only about 2% of my followers. Eventually, I realized that the time and effort I was spending to update the fan page wasn’t worth it. Facebook was kind of holding my fans hostage.

I was happy to see my friends more often in real life. However, sometimes I feel like I’ve missed out on something because I’m not on Facebook. Earlier this year, several friends had babies, and they forgot to tell me because they assumed everyone saw it on Facebook. It’s a trade-off, but overall, for me quitting was a positive move.

The only network I now use regularly is Twitter. As a journalist, I still find value in it. I also appreciate that Twitter, unlike Facebook, let you set up your feed as you want, follow the people you want to follow and it’s not going to feed you with content based on what an algorithm thinks you want.

The problem with social networks is their users’ weakness. We don’t have a say in how we want their products to be. When Facebook releases their quarterly metrics, they talk about engagement, because their advertisers buy those metrics. The fact that social networks are designed to make you addicted and to keep you constantly checking and scrolling on the newsfeed is also problematic. Besides, the way viral content spreads on these social networks is also worrying.

There is a lot of evidence that extremist content and fake news spread faster than truthful reporting.

I would like social networks to be more decentralized in the future so that users could have more control over them. On the other hand, if the government starts to play a bigger role in regulating these platforms, it can become a slippery slope for us, too. You don’t want anybody to censor content.

I’m not sure whether the best path is to make Facebook, Twitter, Instagram, and other social media improve their design and algorithms, or to build something new that will function better and be more positive for society.

When I was doing my Master’s in Sweden, there were private parties that were permitted only if they had guestlists. These parties would go on until 7 in the morning sometimes, while regular bars and clubs closed at around 4 am, and you could only get on the guestlist through Facebook. Then, obviously, since you had a Facebook account, you got messages from your friends. So I used Facebook to get in touch with people, but didn’t post anything.

I closed my account shortly after I left Sweden, which was at least 10 years ago. I was never fond of posting pictures. And then the more I was learning about privacy issues and the way companies transfer data, the more I disliked that story.

When I meet with friends who have social media, they already know so many details about each other, which I have little chance to find out about staying offline. It’s harder to communicate with people without social networks, but people who really want to get in touch with me will do it anyway.

I’m not sure whether it is easy for people to close their accounts, even if they want to, because they deal with a lot of social pressure. But I don’t feel like reviving my accounts for some reason. Fitslty, social networks are far from real lives. You may try to maintain the image you have created online, but it is impossible.

Secondly, After Snowden revelations [about worldwide surveillance of the US government],  Cambridge Analytica leaks and all the news about Facebook we read every week, I believe people should pay more attention to their security settings.

I believe it is important to keep your personal information away from strangers’ eyes to protect not only your privacy, but also others’.

For example, I held a workshop on digital footprint with an LGBTQ+ group in Brazil, and then I did a presentation on Internet security and people started following me. I thought  some of them could be from the government or police, and maybe that could endanger members of the LGBTQ+ group I did a workshop for. So, closing my accounts help me protect other people as well.

I think there is no person that has nothing to hide. Otherwise, we’d have been living in glass houses without doors in bathrooms.

Nobody would want others to have access to their email account or see their browsing history. However, unless you are a nomad living in the forest somewhere, your data is not just yours, it can reveal a lot about your family, your partner, colleagues and other people.

My first social network was a local one. When I was about 13, many teenagers in Siberia joined the network called “One, two.” We mostly used it to chat with friends, then it became more of a platform for sharing music than chatting. We grew up and stopped using it. Then I had an account in Vkontakte, which is very similar to Facebook. I also had an Instagram account while in university, but I was never really interested in sharing my photos. When I moved to France to study, I joined Facebook to get updated in the study group, but I deleted it after a year or so.

I deleted my Vkontakte account after a bet with my friend. We wanted to check whether we could live without social media for at least a month. And when that month passed, I didn’t reactivate the account. Since then I have been trying to be cautious when it comes to signing up for a new social network because I suppose to see a lot of trash there.

I believe that only 5% of the information in the newsfeed is really useful and we can easily get this information from other sources. And the idea of sharing my life with people who I don’t know well is not appealing to me.

I don’t think I’ve ever missed social media because it’s always been more of a hassle to me. I never enjoyed scrolling the newsfeed. I find out about what’s going on in my friends’ lives by talking to them, not by seeing their posts in the newsfeed.

I grew up in the world that wasn’t digital yet. The first mobile phones with basic functions appeared when I studied at school. Besides, not everybody could afford them. The technology boom and the rise of social media came later.

So it was the people a bit younger than me who grew up with a smartphone in their hands. They must be more addicted to technology and find it really hard to quit social networks one day.

I think the problems the documentary “Social Dilemma” covers affects the generation after mine.

I think parents have to take more responsibility. Now many of them just give smartphones with cartoons to their kids to win some free time and to escape playing simple and boring games with them. But later these adults regret that, because smartphones have a strong effect on mental health. Children prefer phones and cartoons to other games, which really educate them and develop their social skills.

When I started working in IT, I began paying more attention to data protection, but it was after I quit all social media. Now I know  that even email services can reveal my personal information. Yes, we should take personal data protection seriously, but I believe we can’t quit technology completely.

I would like people who develop thу industry of social media to be more serious and careful. People want to invent something breakthrough, but ignore the other side, which is dangerous. It is in a way similar to the nuclear bomb.

I had been using Facebook for more than ten years, at first to connect with friends and share experiences, and then to connect with like-minded members in my community. I also used FB to promote arts events. Eventually I would read the news there, searching for foreign publications as well.

In the summer of 2020, when the pandemic exploded, I no longer had the need to promote events and recognized that I was spending too much time on Facebook. My feed was saturated, and there seemed to be a surge in advertisements. I became increasingly disappointed in the uncivil discourse on FB, particularly in comments people posted in response to news stories. I was also disappointed in FB’s willingness to allow questionable posts. Removing the app from my phone did not seem sufficient and I decided to pause my account. After a short time, I deleted it.

It has been about two months since I stopped using FB and I do not miss it at all! Being “off Facebook” allowed me to make contacts with people more purposeful. I still use Linkedin, and to a small degree, Twitter.

My concern is the degree to which the public has become casual in expressing anger and a lack of compassion on social media.  Also, social networks make us take genuine human connections for granted, which is really sad.

In the end, everyone has to make their own decision as to what social media platform suits them. Social media is here to stay. There could be shifts, however, as users become disheartened by the toxic environment online.